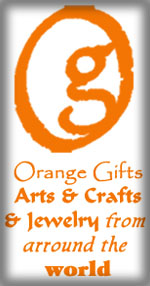 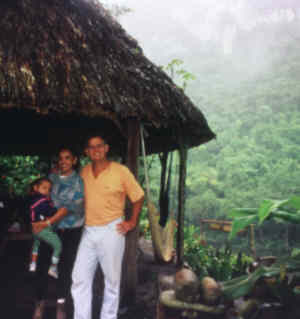 Through his years of travelling, my dad, Caesar Sherrard, made jewelry by hand from seeds, semi-precious stones, copper, silver, and gold wire, and generally anything that was to be found in the country he was in. He would sell and trade his hand-made jewelry and used the proceeds to continue to travel the world.

In the early 70's, he arrived in the USA for the first time. There he met my mom and taught her how to make jewelry. They travelled the USA to different trade shows where they'd buy and sell jewelry and art and crafts.

In January of 1976, my dad, Caesar Sherrard and our family arrived in Belize enroute to Costa Rica. He was looking for a peaceful country to raise a family and Belize sounded like a serious possibility. Driving over the Hawkesworth Bridge, that joins the twins towns of Santa Elena and San Ignacio in Western Belize, the beautiful Macal River cast its magic, and we never left!

We purchased 40 acres on the Macal River, 10 miles upstream from San Ignacio and Santa Elena, and started farming vegetables, chickens, and goats. The area was called "Macaw Bank" after the huge Scarlet Macaws that lived on the banks of the river. The road to Macaw Bank was in such a terrible condition for most of the year that it was impossible to drive to town. So my Dad bought a dug-out canoe (called a "Dory") and an out-board motor and, by this means, we'd take our produce to market every Saturday morning. We'd sell our produce at San Ignacio's "Saturday Morning Farmer's Market", buy provisions for the following week, then head back upstream to our farm. 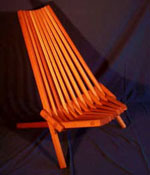 They continued to make jewelry which they'd sell to the British soldiers based in Belize. As farming became even less profitable and I got closer to the age when I'd need to start school, he realised that he'd have to move to town and had better figure out a way to pay for my education. So bit by bit, we got involved in wood working. With no training, learning from mistakes and scrambleing to find a market for the products, we started manufacturing "Mahogany cresent-shaped moons" with an imported Austrian crystal hanging in the middle. They were beautiful! When hung in a window, sunlight would get refracted by the crystal and throw a rainbow of color through-out the room. And due to the shape of the moon, the wind would spin the moon and crystal and rainbows would sparkle around the room!

And that's where it all started.

A year or so later, my dad designed a chair which would become our #1 product: the Clam Chair.

This durable chair, made of genuine Mahogany (sweetena macrophylia), has been exported, in tiny quantities, through-out the world! Made of only choice peices of mahogany and constructed to last a lifetime, this chair folds flat for easy shipment and easy storage. It is great indoors and outdoors and we've even used them in our swimming pool! Rain, sun, snow, desert, no problem. Our only problem with this chair is that it literally lasts forever!

Since then we've continued making jewelry and wooden products. Over the years our product line has grown and our customers have become return customers and now we've decided to offer the world our products by way of the internet.

We wholesale and retail. However, because these peices are all hand made, we do not produce large quantities. In the past, we approched "Sears & Roebuck" and "Pier 1 Imports" to be our outlets, and even though they were eager for our products, their first order was for more than we could produce in three years!

So, we're now international by nature of the web, and offer our finely made, hand crafted products directly to you!